I have observed NGC2420 three nights on a row by now. Two times with a 150mm f/5 Achro and one time with a 120 mm ED Evostar.
I remembered I had sketched it before and decided to take the earlier sketch as the base of an experiment. Underneath I placed the full version, so you can see what I have done.

- Rough sketches are normally made by me at the telescope. Once inside I make a new one on a sketching bloc.
- I photograph them.
- I take out the Tungsten color in Irfan.
- Convert it in Irfan from positive to negative.
- Adjust the background a bit by altering contrast.
- Finally I open the sketch in Paint and make some final alterations like adding a text and outlining the subject.
So far so good.

1. It occurred to me that in graphics point sources like stars have an obvious peak of light in the middle. Although we don't observe it that well, through optics a point source is surrounded by diffraction rings. So: light weakening at the edge. Well how about adding some grey at the edge of each star? And making the center pure white?

2. In a faint open cluster the background in a small telescope is often illuminated by the stars we can't see. We can see it with averted vision, and sometimes some fotons hit a rod in the retina, with sudden vision as a result. It disappears as quickly as it came. How to do that in a sketch?
I tried the following. Of course a basic glow was already in the original sketch. Then I added tiny white and grey specs, so small that you can hardly see it in a normal version of let's say 640X640 pixels.

I hope you will notice some effect. Click the picture one time to see if it has effect. Click two times to see what I have done.
Please let me know.
Thanks, John 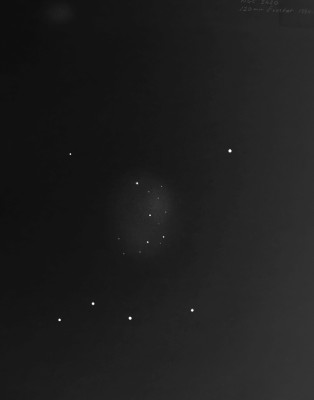