Jupiter from June 21st with 3 Moons and shadow

Jupiter from June 21st with 3 Moons and shadow

I finally got around to processing some of the Jupiter images from June 21st. It was captured in FireCapture and stacked in Autostakert then off to Registax and then PScc. It was about 5% of 12,000 frames stacked over 60 seconds. I had the ADC on, but did not have it set right due to my Mount issues that night and had to keep hitting the back and nudge the up with hand lol. I kind of see how important it is to have it now with Jupiter low in the sky about 26 Deg. I noticed it most on the moons. 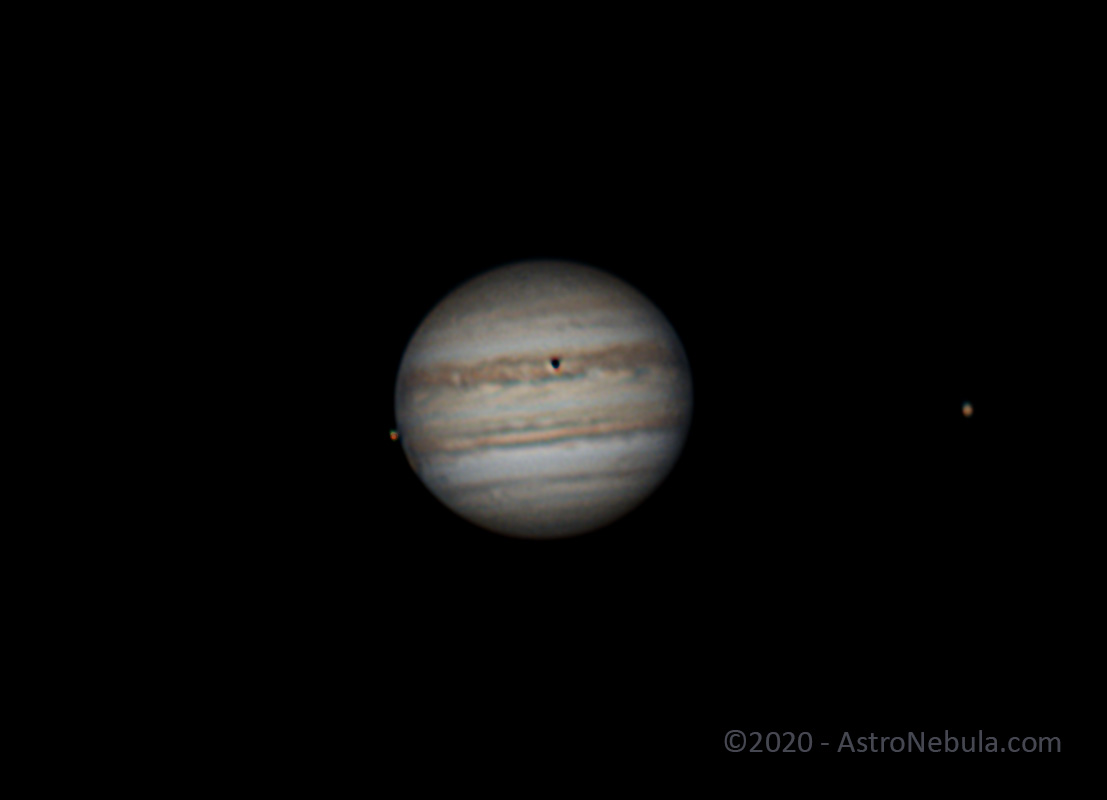 Re: Jupiter from June 21st with 3 Moons and shadow

Tell me about your ADC. I'm seriously considering the purchase of this accessory. Even though Jup gets up to 47° Alt at my location.

Re: Jupiter from June 21st with 3 Moons and shadow

Tell me about your ADC. I'm seriously considering the purchase of this accessory. Even though Jup gets up to 47° Alt at my location.

The ADC works really good I think, you can totally notice the difference when you see the blue and red variants. Basically it is 2 prisms that redirect the distorted light from the atmosphere and refocuses it and corrects it with the ADC being Horizontily level and a white knob in the middle and you spread the two levers apart at even rates until you see it aligned. You have to correct it every 10 min or so while Jupiter/planet is climbing in altitude. then when it is near its highest point you have about an hour of not adjusting it then as it goes down. But still could be useful under not so good seeing for you or when it is lower and clear at the time. Others know more then me, but this is what I read about it. It could also be usefull for moon when it is low.

And with FireCapture it has an ADC tool where you alighn the Red and Blue Circle until it centers together near the white circle. If you go to fire capture even with out it and check it, you would see those circles bounce around.

It also has a ZERO position where it does not do corrections if you want. That is good when you don't need it. But I only used it a few times so far and the time before this I got the hang of it and canceled out the atmosphere distortion. With out it being used properly in the image above you can see it on the Moons with Blue top and red bottom smear and on Europa's shadow. I had my ADC all set, then my went so I left it in since I did not feel like refocusing and stuff and just scrounging to get the imaging in so it was way off.

You can get one used for about $100 in classifieds. They are hard to get now new from online shops I think. There are 2 versions, the old one and the new one. The new one has a bubble indicator which makes it easier to know you are aligned horizontly. But the older version is the same thing as the new, but no Bubble thing. I bought the old version (2-3) years old with no bubble, but found the bubble attachment ring on Agena for $20. I just took the old ring off and replaced it with the new bubble ring. so it does not matter if you see one with or without.