It’s that time again! We have a new month and some new targets for you to pursue, whether you be a visual observer, sketcher or imager. The sky has shifted a little more of course bringing some new stuff to center stage, but don’t forget the March objects either if you have not visited them. They too are still accessible. So let’s take a closer look at what I have selected for you this month.

Representing the northern celestial hemisphere this month I have selected the Leo Triplet. This trio of galaxies is a spring staple just below the lion’s hindquarters. The two main components, 65 and 66 were discovered by Charles on 01 March 1780, with the third, 3628, discovered by William Herschel on 08 April 1784.

The galaxies form an isosceles triangle tipped slightly NNE, with 3628 at the apex about 36’ north of M66 and about the same distance NNE of M65. The two galaxies lie closer together at the base of the triangular grouping, separated by about 20’. At a distance from us of about 35 MLY, the trio is an actual interacting group. Collectively the group is found in Dr. Halton Arp’s Atlas of Peculiar Galaxies under the category “Groups of galaxies” as Arp 317. M66 displays signs of distortion due to interaction in the past, most likely with 3628, and itself is found in the Arp atlas as Arp 16 in the category titled “Galaxies with detached segments.”

The appearance of the two parallel ovals of M65 and M66 close together with the dimmer thin oval of 3628 oriented perpendicular to the galaxies to its south is an intriguing view in the same field. Look for brighter cores within the duo, and possibly an uneven mottled appearance in M66. The larger 3628 may also appear uneven along its major axis due to the dark lane bisecting its edge on disk. So take your time to both locate and study this fine trio of galaxies. They lie in a rich area of the sky for galaxies and are certainly highlights of the early spring sky.

3372 (Carina, emission nebula, mag=3.0, size=2.0°):
Let us travel to the large southern constellation, Carina the keel, which was formerly part of the gigantic constellation Argo Navis. Here we will pursue what I believe is the finest emission nebula in the sky. That is not said to negate the prominence and beauty of 42 in the least. But the first time I laid eyes on this behemoth I was simply astounded. Discovered telescopically by Nicolas-Louis de Lacaille in 1751, it was also observed numerous times by James Dunlop. John Herschel had this to say about the nebula: "It is not easy for language to convey a full impression of the beauty and sublimity of the spectacle which this nebula offers, as it enters the field of the telescope fixed in R. A., by the diurnal motion, ushered in as it is by so glorious and innumerable a procession of stars, to which it forms a sort of climax, and in a part of the heavens otherwise full of interest."

Known famously as the Eta Carinae Nebula, even from about a 5 suburban location just south of the equator I found it an easy naked eye object and very bright and curious in 10x50 binoculars. With a scope of most any it turns into a true showpiece of various clumps and knots of nebulosity, permeated by dark lanes in various directions. If you have a narrow-band nebula filter, give it a try. This is truly is a visual wonder.

Embedded within its huge glowing field are various open clusters such as Trumpler 14, 15 and 16 as well as Bochum 10. Of course there is also the namesake star Eta Carinae, which is expected to go supernova at some point soon, in astronomical terms that is. There are two lobes emanating from this star, known as the Homunculus Nebula. These lobes are the result of an outburst from Eta Carinae in the late 1840s into the 1850s which saw the star brighten from about magnitude 1.5 to -1.0. This even was chronicled by John Herschel. Eta Carinae now shines at about magnitude 6.4 biding its time. Also within the nebula complex is a prominent dark nebula within the complex, named the “Keyhole Nebula.”

This object is a true of the southern sky and is a fine target for visual (and sketchers) observers and imagers alike. So why not turn your scope its way to enjoy its bright silent beauty, with its undertone of violent activity from Eta Carinae.


3115 (Sextans, lenticular galaxy, mag=8.9, size=7.2’x2.5’, SBr=11.9):
We next head to the heavenly sextant. This constellation straddles the celestial equator, but our target lies almost 8° to its south. Sometimes called the spindle galaxy it is bright even from my typically 5 backyard. It appears as a thin sliver of bright diffuse light, with a core that is brighter still. Its central bulge tapers out to thin tips at both ends.

Discovered by William Herschel in 1787 he described it as bright, large and extended. This lenticular is the brightest galaxy in Sextans, a constellation frequently overlooked by observers since it is not bright and contains no objects. With its brightest star (Alpha) shining meekly at magnitude 4.5 the constellation lies quietly between Leo and Hydra.


3132 (Vela, planetary nebula, mag=9.2, size=1.5’x1.4’, SBr=9.7):
We finish up this month in another former portion of the old constellation Argo Navis. Vela the sails is home to this excellent planetary nebula informally known as the Eight Burst Nebula or the Southern Ring Nebula. Discovered on 02 Mar 1835 by John Herschel, he recorded it as a "planetary nebula, very large, very bright, elliptic.”

I recommend using at least a narrow-band nebula filter to give it more visual contrast. Even better is an O-III line filter for bringing out detail with the nebula’s disk. I found while observing it with a 5-inch refractor that without a filter the magnitude 10.0 central star tended to overwhelm the envelope of the planetary, so using a filter will tame that star allowing one to see more of the nebular structure. It is a fine object for imagers who wish to experiment with trying to pull out deeper details. So give it a try and see what you can do with this nice planetary.


There you have it for this month. I hope you enjoy the pursuit and the challenges that I have presented to you, whether you live north, south or somewhere between. The sky is a treasure trove of wonderfully beautiful objects of many types, and they are just waiting for those with the desire and patience to find them. Good luck friends!
Alan

Thanks Craig, appreciate the comments and hope you are able to go for some of them this month.
Alan

Thank you Gordon, and please do!
Alan

Looks like it's going to be clear here on Monday night.

Thanks Graeme and good luck with your efforts.
Alan

This was a fun one.

We did this one during a LIVE event. I used my ES80ed-cf scope, EQ6g mount, guided with Sharpcap pro software for capture. Being a "Northern" area target, it was easy to find. I capture 34 frames of 60 seconds each using my ZWO ASI533mc pro color camera. 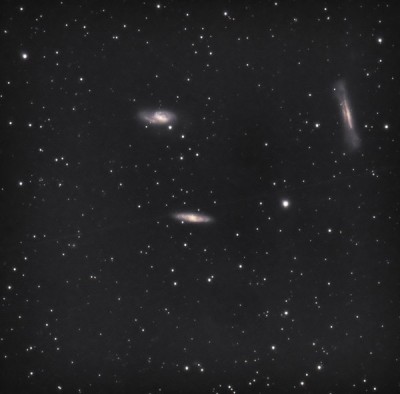 Next I tried for some "Southern" targets.
I was only able to capture one of them (NGC3115) since it just cleared my garage roof. The other target (NGC3372) was too low and NGC3132 was just too small for my telescopes . 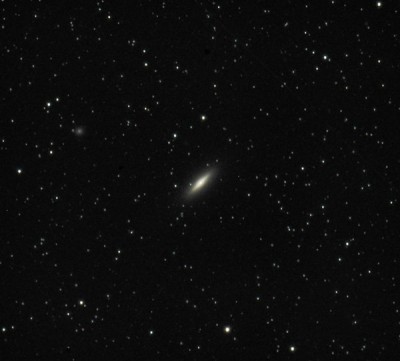 It was a fun adventure!!
Thanks to both Astrobee (Greg) and helicon (Michael) for joining in on the LIVE event!!

Excellent images Gordon and thank you for posting them. Nice detail in the triplet, especially the detached section in M66 and the dark lane in 3628. In the second image you also captured the mag 12.5 lenticular galaxy MCG -1-26-21 (left and slightly up in your image). Well done!
Alan 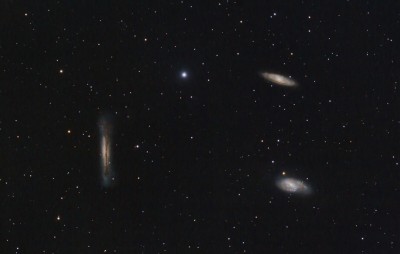 Well, since this is the monthly challenge and I just reworked this target, I figure I should submit mine.
This is a very aggressive crop and I processed it several times to try to come up with the right balance.

Thanks for your consideration! 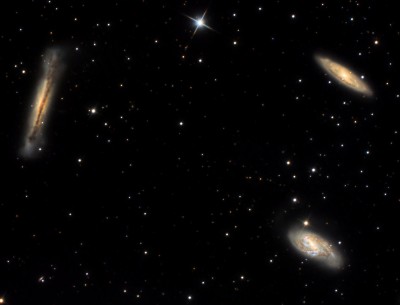 Thank you both Dyno and Larry for your Leo Triplet submissions. Both nice with good detail and balance. Your contributions to this month's challenge is much appreciated and I hope you are able to target other challenge objects and don't forget to take a look at the March challenges as well. Well done folks.
Alan

Thanks for the kind words Alan!

Here another submission of M65 an M66. From the other end of the globe under 8 skies.
The Leo galaxies are quite a challenge under skies, a bit more challenging than M84, 86 or 87 in Virgo. As I observed all five of them I could easily see some differences. Galaxies of that magnitude under 8 skies all look a bit the same. A slightly lighter spot against the sky background, averted vision and a hood very necessary.

M66 makes an exception to this, due to the presence of two magnitude 9.8 resp. magnitude 11 foreground stars, right next to the galaxy. Another tremendous help is the irregular appearance of the galaxy. The northern part appears a bit brighter.
M65 looks like a standard galaxy should look like under these conditions: a lighter spot in the background darkness. It is nice to see the two with averted vision in one field of view. That makes it special and satisfying.


I had just changed the setup of my Leica Zoom eyepiece. By placing an extra projection tube between barlow and eyepiece, I could not only use my standard 98X to 196X in the 150mm achromat, but also approximately 133X to 266X. That turned out not to be necessary. About 150 X turned out to be the most ideal magnification at that time. At the time, enlarging more meant blurring the object.
Telescopes in Schiedam in frequency of use : * SW 150mm Achromat F/5, *grab and go: SW 102 Maksutov F/13,
*SW Evostar 120ED F/7.5, *OMC140 Maksutov F/14.3, *Vixen 102ED F/9, on Vixen GPDX.

It's great to hear you give such great reports! Some people say the art of Visual Observing is dying. I disagree!!

Thank you John for your visual impressions under heavy light pollution. Having toiled for some years in 5 to 6 skies at home, I know the impact this has on galaxies. Not nearly the same as with your experience under 8 of course, but still challenging nonetheless. That is why I have a lot of admiration for visual observers who pursue their craft under those conditions. It takes a special dedication to refine your observing skills under harsh skies where even a reasonable level of dark adaptation is hard to come by. Well done my friend.
Alan