Over the years, M42 has always been quite a sketching challenge for me.

Quite a few years ago I was somewhat surprised at the dotted appearance, the "blobs" under the trapezoid in the sketch. In my C8 in the nineties they really showed up as "blobs". I've always looked for it in photos. They were never as clear as I thought they were. Not even in the C14 of my local astronomy association. Still, I somehow believed their existence. Quite silly.
In the early 2000s, I got the chance to view them through someone else's C8. Until then I realized that all along I had seen the incompetence of my old instrument to show what it really was: irregular clouds, not sharply defined "blobs". I was glad it was dark when I realized that because I was quite embarrassed at the time.
A rough sketch was made on January 8 with my 150mm Achromat. I tucked the field sketch into my observation vest, still didn't know if I would finish it. Yesterday I looked at M42 through my 102mm Maksutov, felt the sketch in my pocket and thought, "Well why not? Let's make the most of it."

Here is the final sketch. Still have some misgivings about it. Misplaced stars, too much curving in some places, some spots not bright enough, others too bright. Anyway, I hope you will like it. 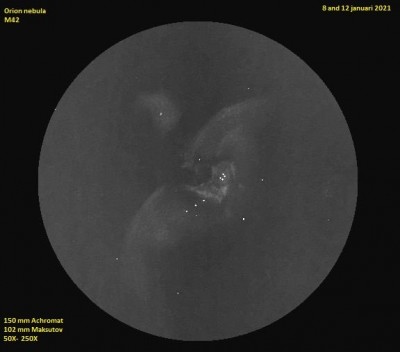 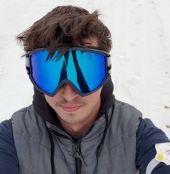 superb, you really have an incredible talent, beautiful, thank you.
it inspires me.
I LOVE REFRACTORS .

WHEN I THINK I AM LOOKING AT THE SAME SKY AS, GALILEO, HUBBLE AND MANY OTHERS, I THANK LIFE OF THIS PRECIOUS GIFT.
Jean-Yves .

“I may not have gone where I intended to go, but I think I have ended up where I needed to be.”
― douglas adams, The Long Dark Tea-Time of the Soul
Top