Yesterday I woke up to a sky filled with forest fire smoke and a lot of humidity: not the best of days observing-wise. Still, I managed to get some shots of ol' Sol, and though the stack wasn't the best, I could still see there was a new sunspot(s) forming that didn't have an AR designation.

The Sun rose just before 6AM; I could see it in my rearview/door mirrors. Unlike the day before, no haze or red tinge. My whole day was spent in sunshine with a constant light breeze and the temperature rising a few degrees from the morning, but no haze and for once, no humidity.

I ran through my day, and 350 km's (200 miles) later I was home again at a bit after 2:30. Had a shower, shot the breeze with the family, finished off the first half of a project I have on the go, and decided to see what our star was up to.

According to Spaceweather.com (which uses the SDO/HMI image), the region I saw yesterday is now showing up with them, but still doesn't have a designation. I give it a day and it'll be AR2848 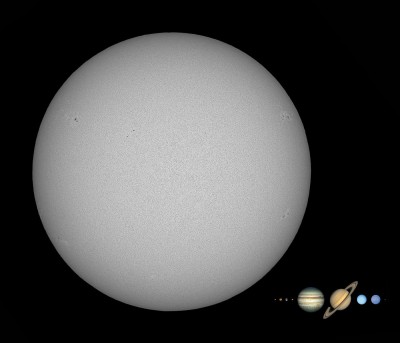 
This is a "map", if you will, of the spots visible, with the question marks being the one(s) that have no designation: 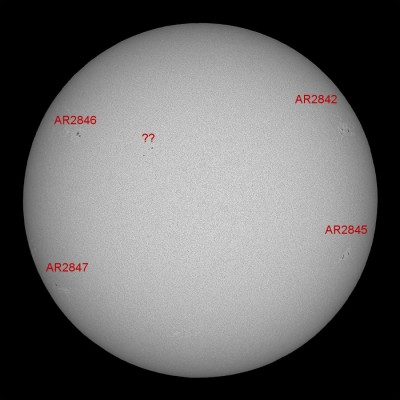 And that's it for me. Been a nice day and it's clear out now and supposedly for the next while after it gets dark, but after almost 18 hours...

Re: Lots of spots

Good solar image, nice granulation on the full res version. Thanks for the annotated version.