The emu constellation interpretation exists in the dreamtime of all Australian indigenous mythologies. It also appears as an ostrich in ancient southern African cultures and also appears interpreted as a Rhea in South American cultures.

This is a mosaic of 12 images, 6 high by 2 wide taken with a 50mm lens set horizontally at f2.8. 60s per image tracked ISO1600. The silhouette was captured separately and added. In the past, I have tried standing still even for a 10-15s exposure and I always come out as a blur.
There's some light pollution on the horizon, the broad yellow glow in front of the Milky Way Core comes from Sydney, 230 km east, the green white glow in the bottom right corner comes from a large mine near Galong. The layer of green glow above that is probably some airglow. 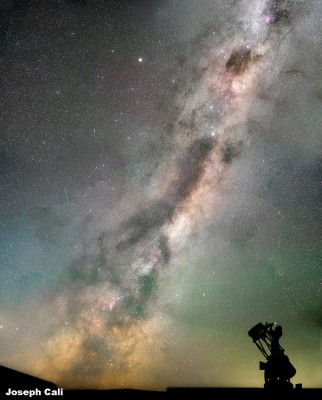 "Eternity is long, especially towards the end. "
Woody Allen .
Top

Very cool, what is even better is that I actually see that big bird!

Congratulations Joe, on having your image selected as todays !!!

Hi Steve. The nice thing is that it's very obvious to he naked eye from a dark sky site. I wanted a rich star field but too much exposure fills the dark dust lanes and can hide the emu.

Thanks for your comments.

That is a beautiful nightscape. I really like it. Nice idea to add in the silhouette.

Congratulations on the award.