Hi all, I've gotten back to imaging and collected a ton of data in June so far for two targets. The ones I'm posting below are only without any processing: just a simple autostretch from and then making sure it sticks so I can create the JPEG. I'm just excited about having new data to share.

The first is the Lion Nebula, sh2-132, which I started last fall and collected less than 30 hours but now I've gotten it to 60+ hours of data for all three filters. This is just the only portion (~22 hours): I wanted to make sure it would all work since last fall everything was upside down and now it is right side up and even though can handle all this usually this was weird since there was no way I could get the rotation angle exactly on and it seemed there were some space curvature and/or telescope position issues making manual line up (where you just flip 180 degrees and try to match the stars with overlapping images - can do this - I use this as a sanity check) impossible. So I was worried about the automated process but the new version handled it BEAUTIFULLY, especially considering so much of this data had partial cloud cover, different seeing/lighting conditions, etc. This is probably the most inconsistent dataset I've thrown at . You can see the lines where the rotation problem occurred so some cropping may be necessary.

The second is the Wizard Nebula, NGC7380, about 4 hours. I've been meaning to do this for a while but I had to remove the reducer on my FC100DF*** so I could get it to fill the frame a bit better (you can see the consequence of not having a flattener with the corner stars and focus is difficult since my FC100DF doesn't have a microfocusser which I've just finally ordered so I can tighten this part up a bit). This is the first targete I've imaged with the FC100DF at its native focal length. Tonight I hope to collect O3 and S2 data. Might've been worth going with my FS128 but it is heavy for me and a PITA to take in and out every night but once I get my observatory (which my wife has agreed to!) then I should be able to mount it for a whole season and focus on the smaller targets.

Comments would be helpful. The Lion Nebula is very faint and I was trying hard to get the mesh at the bottom which shows up the most with the O3 filter and I have about 23 hours of data which I hope will be enough (otherwise since I've changed my setup so much now I probably will have to come back to it another day).

*** - see also my post about about adventures Powermating which so far has failed miserably but I understand why now, having to do with the resolution of my scope vs. the sky vs. configuration. 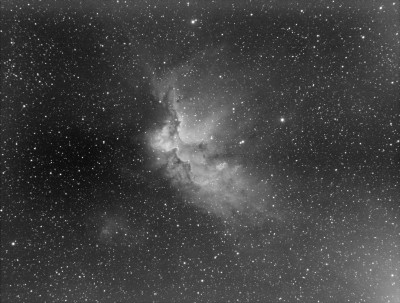 Nice images Ram. The lion really stands out in . Looking forward to seeing the finished work. Hi Ram - You're killing me! Complaining about having less than 30 hours on a target? I only wish I had the stamina to collect that much data on a single target. Enough of my complaining!!

The data on the Lion is spectacular. No noise to be found. What a pleasure that must be to process. Even at 22 hours the body of the lion is still on the faint side. This is a challenging target. Look forward to the finished product.

The Wizard data looks much more like what I'm used to seeing. The target is all there, but, the fainter nebulosity is not all filled in. That will definitely take a bit of noise reduction. Look forward to seeing the finished version of this one too. Lovely images Ram, dedication certainly pays off - I too wait to see the completed work.
Cheers, 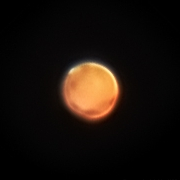 Thanks again Gordon for the selection and thanks for pointing it out Ruud!

I highly recommend everyone check out STEVE333's processing of the Lion nebula data based on his removing stars technique which is stunningly impressive to me, from where I was getting frustrated to opening up a world of possibilities: viewtopic.php?f=22&t=11167#p95059

Thanks all - since I've returned, this forum has kept me busy with ideas and encouragement and I love it.