Agena has started a new service of testing their photo newtonians to be diffraction limited before they ship out. I asked them if they would do a test on just a mirror order and they said yes for an extra $15 on a 6" 6 mirror. Sounded great to me to know was not getting a doggie mirror.

If only can get it all assembled before Mars goes away.
Top

Lady Fraktor wrote: ↑Mon Oct 05, 2020 4:13 pm I must be missing something...
You are paying someone to tell you your mirror is at least average?
Do you have a link to this service, I could not find anything.

Have to agree here Garbrielle. The minimum it should come out of the factory is diffraction limited, but better is well, better, of course. If you look at the below link (as an example), in the descritpion section under item #2, they describe the testing procedure applied to the scopes. This is for all the scopes they receive, not just the imaging newts.

I did not notice anything specifically detailing testing of stand-alone mirrors purchased from them. But obviously if they have the testing facility they could do so if asked as the OP did. Something I found interesting is that Agena stated in the Q&A section for their mirrors that will sometimes center spot them, but mostly not. While its not difficult to do so yourself, nowadays, I find it pretty poor practice that the manufacturer doesn't do this for each mirror. Granted one cannot always be 100% certain that mass-produced mirrors that come center spotted are truly done so accurate. I know of some cases where mass produced dobs have come with mirrors that were spottted slightly off-center. This is something that everyone who gets one could easily check to verify. I have not had any issues, but have heard of some that did and had to re-spot theirs. Mass produced telescopes are certainly of higher order than they used to be, but that doesn't mean a less than acceptable example makes it through the QC process from time to time.

The old icons like Criterion 6" f8 and Edmund 6" were sold under the quality label 'diffraction limited'. Gonna see if new mirrors can meet or beat the oldsters.
Top

Jones wrote: ↑Tue Oct 06, 2020 11:47 pm The old icons like Criterion 6" f8 and Edmund 6" were sold under the quality label 'diffraction limited'. Gonna see if new mirrors can meet or beat the oldsters.

mirrors beat the pants in terms of surface accuracy at 1/16 wave RMS error or better. Edmund and Criterion mirrors were about 1/8 wave. I have had 2 8" and 1 12" mirror. All were diffraction limited. One of the 8" mirrors was a little rough. If is average for now they are about twice as good as Edmund and Criterion were.

Agena went thru a stack of boxed mirrors and found 2 real good ones, 1/8 wave and 1/10 wave, so I bought the better one. Will report results in 2 weeks against my Edmund 6" f8.
Top 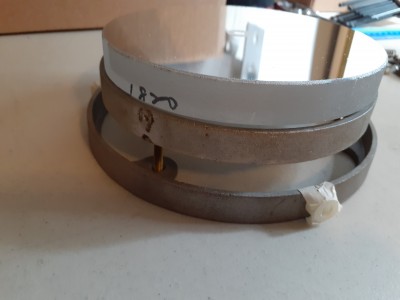 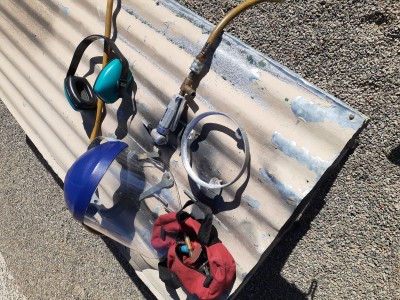 Glad I did not sell off my old tools. Die grinder came in real handie for hogging out rim around mirror.
Top

The 6" 6 with Agena certified mirror is ready to go.
Of course this is Arizona and the skys are not cloudy all nite, no California fire smoke either. 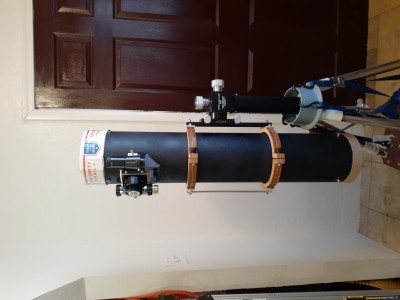