From an EQ to an Alt-Az

Tell us about those other projects you are working on.
Post Reply
2 posts • Page 1 of 1

From an EQ to an Alt-Az

I love summer. I hate humidity. There, rant over...

Yesterday (Sunday) was 35C (95F), toss in some nasty humidity, and that is why I stayed in the basement all day.

I wanted to try and fix my Sears 60mm 11.6 mount. The mount has developed some slop on both the and axis, which is pretty sad as I regreased it all at the beginning of the month. It's an old mount from my Tasco 4.5"; the legs don't fold in, and they are not too far apart, which makes it somewhat tippy, for lack of a better term. Add my onto the scope, and it quickly becomes very unbalanced. I believe the camera weighs about what the scope does! 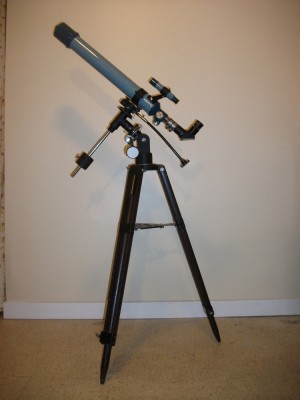 Well, I thought about it, and even if I got the mount to be slop-free (again), I still have the balance/tripod legs issue....


About 6 years ago I made a poor man's version of a Twilight II, as my daughter liked to come out and look with me.
Now she's a teenager so the mount doesn't see a lot of use, and both scopes normally ride on my CG4 now, though not at the same time 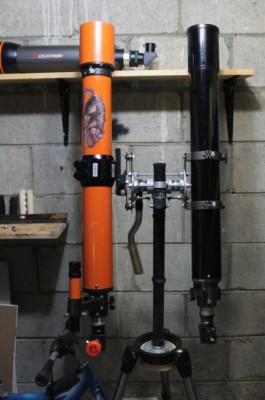 I took that apart, and with some scrounging around and a small weld, came up with this Frankenstein 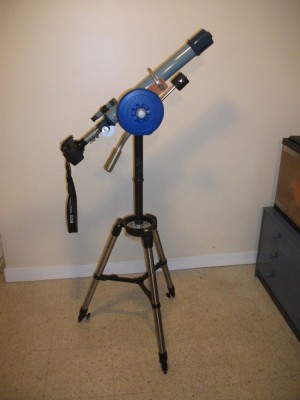 No slop on the threads for either movement; I used a couple layers of thread tape. The best part is the counterweight. Slide it all the way forward, and the scope balances perfectly with the camera. Slide it all the way back, and it's perfect with any lens/diagonal combo. I can't get over how well that worked out! I also bolted on a "stopper", an L bracket, so the scope can't drop down when I take the camera off. Mayhaps I will trim the excess from the hose clamps as well one day.... 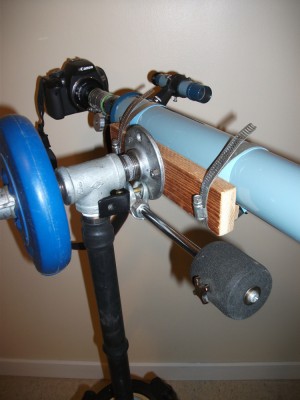 I took the whole mess out last night (it weighs about 15 lbs, one hand special) and was amazed how humid and soupy the air was. I figured this might not go too well. Visually it was not good... Can't remember seeing the Moon shimmer that much in quite some time. Even with a 25mm KK, it was like looking at a reflection in the water. Yeesh.

Well, thought I, I'm here anyways, lets see if I can get some pictures. I took 80 shots of the Moon. I then noticed Jupiter had cleared the roof. Since I was already focused for the Moon, I pointed the scope at the gas giant and took another 80 frames.
I would've waited for Saturn, but I couldn't take another half hour of this humidity, and I was tired.

Got in from work today and thought to take a look at what I had from the camera. Long story short, I ended up stacking 7 of the Moon shots and 26 of the Jupiter ones. The humid air doesn't help this process, and the Moon was pretty low to the horizon when I took these. Jupiter fared better for sure.

So this is the results. PIPP, AS3, and some mile tweaking in Registax for the Moon shot, nothing for Jupiter. If you look close and squint you can see three of Jupiter's moons.
Not very good, either one, but at least the focus is on and the mount is rock-solid 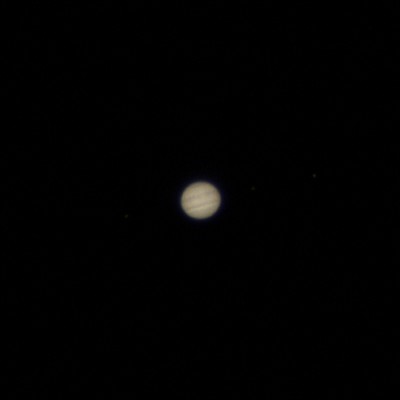 Tonight calls for clouds with still more humidity. And tomorrow, and the day after....

Thanks for looking and here's hoping you fare better than I!!

Re: From an EQ to an Alt-Az