Tell us about those other projects you are working on.
Post Reply
9 posts • Page 1 of 1

Hi everyone, hope you are all good

Today I decided to finally make the modification to my Jason that I’ve been thinking about for a while.

First, I should go back in time a bit, if that’s OK with Einstein. About four years ago now, I answered a local buy and sell ad (Kijiji) for an 80mm 15 Jason for $80. These were made in the late 70’s; every time I look at it I think of the Voyagers. Now, I have heard on other forums that these Jason’s were sometimes soft on focus. I’ve also heard the same for some of my various Tasco’s. These scopes, at least in the 60’s, 70’s and early 80’s were mostly made by a company called Towa. They did make their own scopes, but all the Tascos, Jasons, Sears, JC Penny’s and others; they were usually re-branded Towas. A few were Royal Astro, and in the latter part of the 80’s, Tsanzutsu. There are others, but few and far between.

I personally have nothing but good to say about Towa optics, both mirrors and objectives, and with this scope, I have 8 so equipped.

All the re-branded scopes made by Towa have a “circle-T” on the label, as you can see below. The only ones that don’t are the actual Towa scopes; I have one. This 80mm Jason had the circle-T in one of the pics of the label in the advert, so I thought why not? For a buck a millimeter… Plus, where do you find an 80mm these days at 15?? It also has an adjustable aluminum objective cell.
I drove the 10 miles, met the guy, and didn’t even haggle the price. I came home with this: 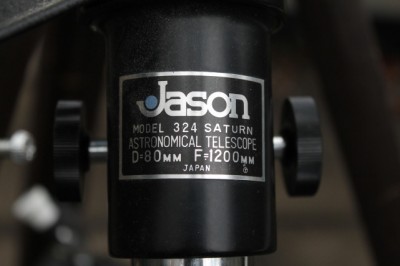 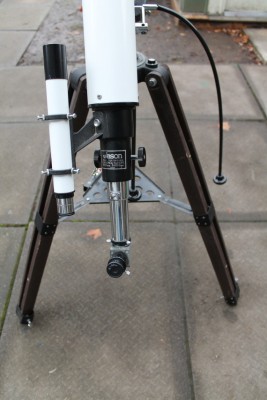 BTW, the lamp is missing the bulb (where do you find one of them?) and the lampshade is actually porcelain. You can also see it has the .965” diagonal and lens. Holy drinking straw views, Batman…!!! 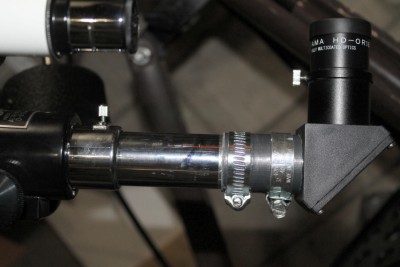 Of course, with the improvement in views, I found I really wanted a two-speed focuser, Yeah, good luck with that for this. So, back to old-school ideas: Alrighty. Once that was all done, I did a star test on it. Absolutely perfect. The views of planets, the Moon, and various doubles have been stunning. I use the stock star diagonal that came with my orange-tube Celestron/Vixen C80 and my Fujiyama KK’s.

So it’s been like that for two years. Great views, with one problem: Getting it out the back door.

The mount it came with is rock-solid. A department store scope on an adequate mount; imagine that! I did mount this scope on my CG4, but with the tube coming in at 53” when in focus, and the feet of the CG4 only being 29” apart… I don’t trust that.

The legs on the original mount don’t fold up; the same is true for all these old scopes. We don’t have a garage, so I keep it in the basement or living room, depending on the weather. This is the problem. The feet on it are 34” apart and the back door is just over 31” wide. Not a big problem, just a bit of maneuvering. Still, the basement stairs are about 30” with a corner, so you can hear me bringing it upstairs for sure; not good in the wee hours. Plus I don’t want to fill the mount legs full of nicks and dings.
I need to make the legs able to fold in.

Fast forward to today. I actually slept in; woke up at 10ish. Came downstairs, and saw the playing “hide-and-go-sleep” under my Jason mount. Her head is in a box that had some parts from a member on here. Well, if that ain’t inspiration, what is?:D Sarah (my daughter unit) woke up, and we decided to go to A&W for an early lunch. Mum stayed at home as she was watching Space Force. It was supposed to rain today, and as we were at the drive-through, it certainly looked like it: 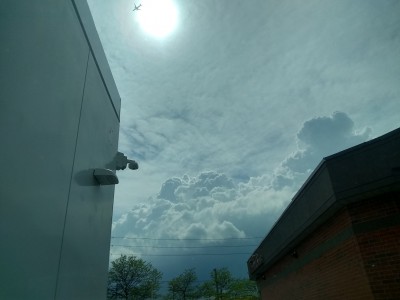 About ten minutes later, Sarah snapped this as we were driving home,;chowing down on Teen burgers, fries and onion rings. I’m really good at steering with my knee… We got in, and it drizzled for about twenty minutes. That was it, but the humidity broke and it rapidly cooled off out. I actually did some housework (way to impress the wifey) and watched the launch of Dragon to the . That was awesome! So nice to watch an historical launch like this; way to go US of A!!
After that I went outside and decided, Nice weather for some welding. 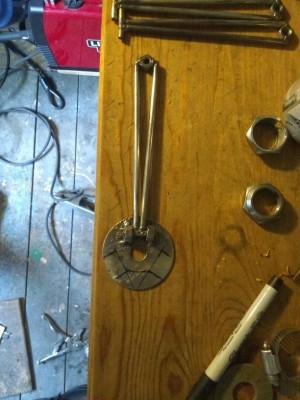 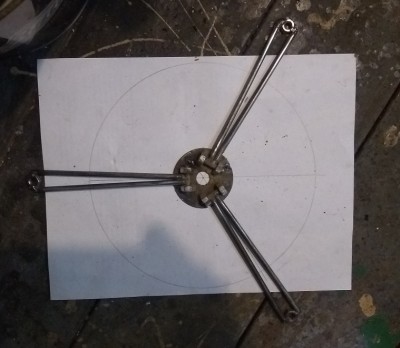 Ok, so it’s ugly and not perfect. One “leg” is out 1/16 more than the other two, but really… It does line up, and since the other side is what I’ll be seeing, it’s all good. I would’ve rather done this with a TIG welder, but flux-core will suffice

This took about an hour. Heat induces warpage, and since I was welding thick to thin, it takes a few passes, and you gotta keep the heat to a minimum, ie give it time to cool before another pass.

Once I did that, I made another weld pass on the nuts at the end of the legs. Turned off the welder, wrapped up the whip and ground wire, and went to stand up. Seems my left leg had pins and needles (fallen asleep), so I put my right hand down to brace myself for the push upwards.
Guess what I forgot was still sitting there. 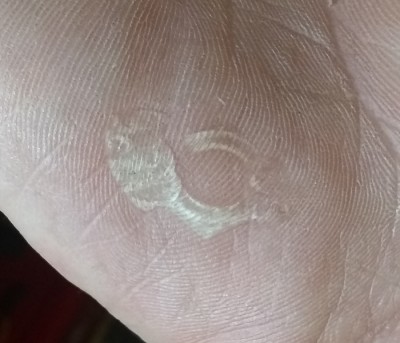 Felt like a cow; from the circle nut ranch…:lol: Funny thing is, it only really hurts for a few seconds, then it’s fine. You play with fire, you might get burned.

After that fun, we had dinner, Sarah went to see a friend she’s been seeing since this started, and I went to try all this. I took off the old .965 eyepiece tray and bolted in my creation. Took a deep breath, lifted the mount a bit by the clamshell, and pulled up on the washer in the center. Wow, it works!

I carried it out the door and took some measurements and pics. I made my whatever you want to call it to make the feet be a little wider apart than what it was as stock. Turns out, the feet are now 40” apart as opposed to 34”. It also feels more solid even than before. It weighs about what my CG4 does (pictured with the Jason mount below), and the counter-weight has to be at the bottom of the rod for the scope to be balanced. This is a pic of the difference in spacing between the stock part and mine:

I’ve played with it a few times now, and all seems good. I might put some thin black plastic I have between the wood legs and mount, but for tonight it’s fine. As I type this it’s coming up to 10:30PM. Supposed to be really nice out after 11PM, I shall see and hope.

And Sarah decided to come out as I was doing the above and take a pic of moi. Man, a year and change ago I was bald and wearing the same hat. No pics of that, trust me. Now? Geez, I can’t wait to get a haircut!!

So far a good day, all considered. Even the is chilled out… 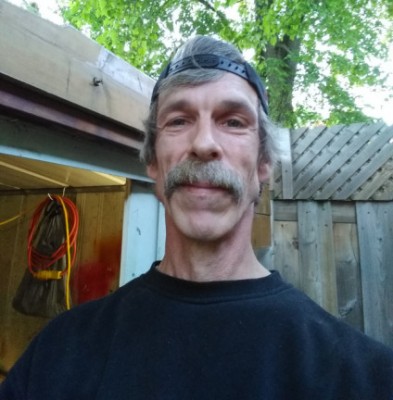 A very good modification to the mount Mark, that should make it much easier to get outside now

Take care and all the best!
Telescopes: 1 more than I need but 2 less than I want
Mounts: 5 Equatorial, 3 Az/ Alt
Diagonal: 3 mirror, 2 Amici, 1 Herschel
Eyepieces: Possibly more than 1 person requires All is at peace here Mark, when you mod, you do mod!

What do you use for spoons in your home?
Cheers,

Hello Mark. Wow, this is great workmanship and fabrication. I really enjoyed reading your report and the nice pictures too. And, I finally got a long overdue haircut myself last week. Thanks very much for posting this on here Mark, and say hi to your family.

Lady Fraktor wrote: ↑Sun May 31, 2020 3:55 am A very good modification to the mount Mark, that should make it much easier to get outside now

Take care and all the best!


Thanks Gabby, and yes it is easier, and most importantly, quieter

All the best to you too!


Thanks Michael, it was worth the skin, literally...

Hope all is well with you!

What do you use for spoons in your home?


Thanks GM! As for spoons, I've discovered the dollar store here has some quality spoons/forks for $2.50 (1.48 GBP) for a pack of five, so that's easier on the relationship

Man, I need a haircut too. If this goes on much longer I'm gonna have to head on down to the city offices and apply for some dog tags...


Hey Bryan, thanks and the mod was needed. Love the scope, but if it's not practical to use.... And a 7/16" wrench perfectly fits my burn mark

That is so funny!!! Man, on that note I'm gonna go to Petsmart or the like and check in for a fur trim as an Afghan hound...
Hope you're all good!

Makuser wrote: ↑Sun May 31, 2020 10:08 pm Hello Mark. Wow, this is great workmanship and fabrication. I really enjoyed reading your report and the nice pictures too. And, I finally got a long overdue haircut myself last week. Thanks very much for posting this on here Mark, and say hi to your family.

Thanks very much Marshall!

Appreciate your comments, and glad you were one of the lucky ones to get a trim. I find the more my hair grows now, the more grey I see...
I said hi to the girls for you, and they say Hi, Marshall! back. As well, the best to you, Sheri and your family

BTW, I took the scope out last night, and had about 5 minutes with the Moon before it yucked up. Still, it was a pleasure to use. Seems more solid with the feet further apart, even though I had to raise the mount a bit. And when I went in, I just folded in the legs and carried the whole scope and mount in as one.
Now I just have to be careful with the height...

's are so much easier. Just not as cheap and classic