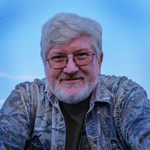 This seems more like an observation report than astrophotography so I'll place it here.

I spent last night in the observatory, mostly sleeping. The sky was cloudy and the moon was nearly full. Sill I hadn't been out for a couple of weeks and wanted to try out some new ideas. I focused first on the moon, then moved over to Regulus and tried out my new bahtinov mask. I had never used one before. It worked great. I also cut an X in a Pringles can lid and slipped it over my focusing knob to create a fine tuning focuser for my . I didn't tally think it would work, but it did. I was impressed. Then I used about 175x on Regulus to split Regulus A, B & C. This was my first time paying much attention to double stars. I think I may take some time and pay more attention to them in the future. Then I slapped the on to grab a quick snapshot before turning the telescope back to the moon. The clouds were fast moving and thick enough that the moon's focus was soft and Regulus could not be seen most of the time. That didn't stop me from trying for a few lunar snapshots. If I like any of them I'll post them. Then I went to bed. I was finished by 10:30.

Here is y snapshot of Regulus. It is a single frame with ISO1600 and a 15 sec. exposure. One of the reasons that
I got into the hobby was double stars. Kind of got away from it with , but just ordered a new scope and hope to get back into observing again soon.

Thanks for the fun report!
Jim

jrkirkham wrote: ↑Sat Mar 27, 2021 4:32 pm. This seems more like an observation report than astrophotography so I'll place it here.

Yes, and thanks. I am somewhat less than sanguine about astrophotography which I appreciate only as an artform, not science. (I did pay one of our local astro stalwarts a pretty penny for two of his mounted prints for my home office.) And in this case, I accept the snapshot as a valid record of your observation. So, thanks, again.

Congratulations on the Rob!