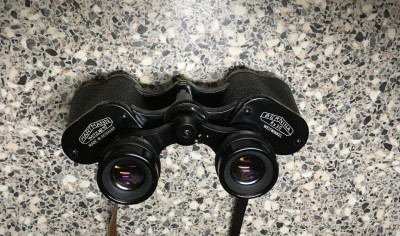 I bought a pair of binoculars again. Although I had considerably thinned out my collection, every now and then a candy passes by on the secondhand market, whose temptations I can hardly resist. In this case a rare classical Hartmann Bernina 8X30. This little sweetheart must be 40 to 50 years old, but arrived in reasonable condition and perfect collimation to me. Complete with a cute bag (according to my wife). Hartmann was a small German binocular manufacturer which produced until 1992. Zeiss has the name, Hartmann the quality. A real vintage and classical beauty! The designation "Weitwinkel", German for wideangle, means that it was produced for the German market. The seller was honest about the shortcomings: the picture was somewhat foggy.

Well that's allowed at that age. Over the years, the internal grease starts to evaporate and that greasiness deposits on optical surfaces. A nice soapy water for the prisms and lenses was not a luxury. Because I did not want to spoil the excellent collimation, I actually only cleaned all accessible optical surfaces and therefore left the prisms in place. This way only the least exposed surfaces of the prisms stayed untouched.

The robustness and ingenuity of how parts were made somewhat surprised me. For example, the prisms are collimated with a kind of wedges that can be operated from the outside, if you at least have removed the bolts from the frontplates (covers). A normal instrument maker screwdriver can then enter the unit, with which you can adjust the prism. I was familiar with this wedge system, but I had never really had it in my hands. Isn't it called Goerz or Gurz-wedges? 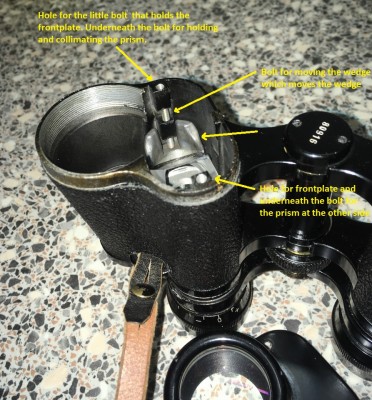 The lenses had already been cleaned before, but some residue was left behind on the inside. Of course I removed that. Focusing is quite smooth, except near the "infinity point". Further investigation showed that the focusing axis is not completely straight. It seems to me that the binocular has tumbled once, although no outside damage can be seen. This is not a nuisance, but you can feel it as a little more resistance near the focussing-point.

The image is surprisingly clear, much clearer than I expected from a seventies / eighties binoculars. The coating is very similar to that of a Zeiss Jenoptem 8X30, but the image is less amber-colored than the Jenoptem. The Bernina gives a clearly less yellowish image than a Jenoptem. Image sharpness on the optical axis is, as you would expect from a classical top instrument from those years, simply excellent. Of course, some blurring appears on the edge, after all, it is a wide-angle instrument with 8.5 degrees of field of view. The Jenoptem has a fractionally larger field of view. Behind the lenses are neat conical diaphragms that prevent extraneous light from penetrating too deeply, but again: it is a wide angle in which that problem is almost impossible to eliminate. The image I had last night on some bright stars, a few deepsky objects and the Moon were a great pleasure, although I'm not going to use it for astronomical purposes.

All in all, I am very satisfied with this Hartmann, which I will take on a sightseeing tour rather than my 8X30 Jenoptem. The less yellow colored image is certainly favorable . As a tourist Feldstecher (German for bino's) a nice competitor for my 7X42 Habicht which, although optically superior, has a smaller field of view. But let me be very honest: I also think it is beautiful to look at. A nice place on the shelve right beside her Zeiss brother will do as well.
Telescopes in Schiedam : SW 150mm F/5 Achromat, SW Evostar 120ED F/7.5, Vixen 102ED F/9, OMC140 maksutov F/14.3, SW 102MAK F/13 on Vixen GPDX.
Eyepieces: Kitakaru, Eudiascopic, Jena, Panoptic, Nagler, Morpheus, Leica ASPH, Brandon, Parks, Fujiyama, Pentax XO.
Binoculars: AusJena 10X50 Jenoptem, Swarovski Habicht 7X42, Celestron Skymaster 15X70, Swift Observation 20X80.

Blood is thicker than water .... despite my cleaning rage, the right half still showed some dirt. I decided to chance it and removed the prism on the eyepiece side on the right. This way I could clean in principle all prism-surfaces in the right half. Then I mounted it again and collimated. That went all right. Not really a much easier collimation than I'm used to, but it worked.

Very unfortunate this brand does not longer exist. When I got the binoculars in and looked through it for the first time, I immediately sighed, despite the foggy inside : "Sow!" An amazingly calm, sharp image and as good as neutral in color was shown to me. The contrast and light- transmission was far more better after cleaning. Actually not a match for the contemporary Carl Zeiss Jenoptem I compared it to. My Jenoptem has the legendary T*- coating. Details were the same, very sharp image but contrast of the Bernina was higher and the color of the image was far more neutral.

In the various comparison tests regarding light transmission that Gijs van Ginkel did / showed, it becomes clear that Hartmann's instruments surpassed their expensive contemporaries. Hartmann's optical workshop consisted of only 20 people...
https://www.houseofoutdoor.com/wp-conte ... 17-HoO.pdf

Hartmann did everything to achieve his goal, to make instruments with the highest light-transmission and contrast of his time. Kogaku Nikon already existed but came 10 years later with their Nikon porro 8X30 E-series. Other brands switched to roof prisms. In the porro 8X30 class that I am writing about now, the Bernina's and the Hartmann compacts can be called the champions of the 70-ties and perhaps also the 80-ties.

thank you for the very nice and helpful review!

Yes, the Wetzlar area with Leitz, Leica, Hartmann, Hensoldt, ..., Seibert, division of Zeiss, and formerly also Docter,
used to be the birthplace of finest optical technologies and instruments.
And your Bernina is certainly a milestone in this legacy.

Glad, you have cleaned away the fog, and wishing you to enjoy the new binos,
JG
Top