I 've finally had enough of walking noise in my images.
I have no more funds to indulge in laptop and PHD 2 to perform dithering and have to make do with just my NexGuide stand alone guider.
I experimented crudely by stopping after a random number of well guided lights and turning off the NexGuide.
When switched on again the guide star remains still on the cross hairs so I can then use fine RA/DEC movement on the NexStar HC to move the star slightly off the cross.
It is then just a matter off re-selecting LOCK and then AUTO CAL and within less than a minute the new position of the star on the sensor is locked on and guiding.
I was afraid the process would take too long but I think because the guider was using the previous parameters I found it was quite fast.
I was happy to loose a few frames now and again out of every 12.
I continued to randomly do this over 2 hours, moving to different quadrants around the cross and sometimes as much as +- 100 pixels!
I was not concerned too much and was happy to leave it all guiding while I went in for snacks and a warm up before returning.
I did about 6 manual dithers this way over 2 hours.
Now this was just an experiment. I realize that it is recommended to dither every frame and not use deviations of more than a few pixels but I just wanted to confirm the crude process would work and how arduous it was to perform.
And it did!
And it became easy after a few attempts. I can develop a routine now.

80 mm f 7.5 ED on AVX. 2 hours of 120 sec lights and some darks. Canon XS modded with Baader M+ SG filter.
Never mind the bloated stars or the patches to each side of the image or the dust spots (I took no flats).
DSS, ST and PS.
I just wanted to see the absence of walking noise which I can assure you would have been strolling all over my image otherwise. 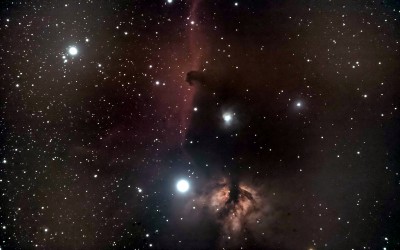 Glad that you got a routine down and saw success ir ridding the dreaded “walking noise” it sure does ruin an image!