Timothy Ferris "Seeing in the Dark"

Timothy Ferris "Seeing in the Dark"

Seeing in the Dark: Your Front Row Seat to the Universe.

Seeing in the Dark by Timothy Ferris is a narrative rhapsody honoring amateur astronomy. You do not need even a telescope to be blessed by the wonder of the skies. City lights are not a barrier. Certainly, a large telescope deep in the countryside, above the surrounding landscape is best. Building your own observatory is the epitome of the hobby. But for anyone, anywhere, passion and patience deliver the rewards. Seeing in the Dark is about the people whose love and work open the universe for themselves and others.

John Dobson built large, rugged, cheap telescopes that he set up on the streets of San Francisco for onlookers. He did not invent the Dobsonian Reflector, but he popularized it; and now hundreds of stargazers enjoy instruments that would have been the envy of professionals a hundred years ago. Here is the deeper lesson: you do not need the Wilson Observatory at Mount Palomar to discover the skies for yourself – and even to publish work of academic quality – because the pioneers of astronomy from Galileo forward did not have such tools. 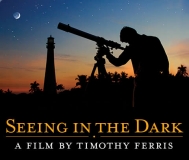 Galileo, Kepler, Caroline Herschel and hundreds of others all relied on telescopes that were severely under-powered – arguably mere toys – compared to today’s instruments. Many of them were amateurs because astronomy was not an academic profession until late in the 19th century. Today, astronomy is one of the few endeavors of scientific exploration and discovery where amateurs contribute significantly to the work of professionals.

Ferris warns that some tension does exist, as amateurs occasionally do not care about or understand the astrophysics of the objects they see, track, photograph, and measure. Largely, though, the working relationship is one of mutual admiration and appreciation. Amateurs are free to devote themselves to work that professionals cannot afford to do.

Amateurs and professionals carry out the same work with the same tools: telescopes, cameras, spectroscopes, and more, including even radio telescopes that bring information about the universe from far beyond the sadly narrow visible band.

The book version of Seeing in the Dark by Timothy Ferris (Simon & Schuster, 2002), was followed by a PBS presentation in 2007. The movie is better.

The book is padded with basic astronomical information about the planets and stars that appears in every astronomy book. The print version of Seeing in the Dark is a long narrative, devoid of pictures. So, while Ferris told me everything I already knew about The Great Red Spot of Jupiter (and many facts that I did not), I had to Wikipedia to learn what a Richey-Chrétien telescope is and to bolster my limited understanding of the Cassegrain reflector.

Re: Timothy Ferris "Seeing in the Dark"

Very interesting and thanks for the post. I agree with your sentiments that amateurs can and do things to increase the body of knowledge in astronomy, which makes the hobby a little unique.
-Michael
Various scopes, 10" Zhumell Dob f/4.9, ES AR152 f/6.5, AWB 5.1" Onesky newt, Oberwerk 25x100 binos, two eyeballs. Camera: ZWO ASI 120
Top

Re: Timothy Ferris "Seeing in the Dark"