“Photography of the heavens is one area of astronomy in which amateurs have made, and continue to make, significant contributions.” (page 273)
Parallax: The Race to Measure the Cosmos by Alan W. Hirshfeld, W. H. Freeman & Co., 2001.

Of necessity, our macroscopic sense of place paralleled the discovery of the microscopic. The same lenses served both purposes. It is telling that Joseph Fraunhofer’s 1829 heliometer, the most exacting measuring telescope created up to that time, included a microscope for reading its extremely precise scale.

Science is an integration. Internally consistent theories explain observable facts. It is how we know anything. More to the point, facts and theories do not exist in isolation. Seeming contradictions must be resolved or eliminated. That speaks to the problem of parallax. As the problem was attacked over the centuries, the attempts revealed other truths. Foremost, perhaps, was that many stars are systems of doubles, triples, and sets of them. From Galileo to William Herschel, it was assumed that two close stars were only visual, not physical, neighbors. Eventually, even after the problem was nominally solved, and the distances to some stars were directly measured, ten new uses were found for parallax.

Alan W. Hirshfeld is currently Professor of Physics, and Director of the Observatory at the University of Massachusetts at Dartmouth, and an Associate of the Harvard College Observatory. He serves as the chair of the History of Astronomy Division of the American Astronomical Society. 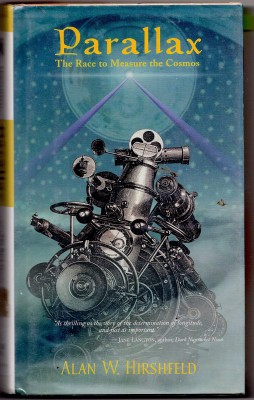