Thanks to our Supporters!

A few years ago, I have upgraded my run of the mill Orion 9x50 RACI to the Stellarvue premium 9x50 RACI. It became quickly my favorite and since I typically deploy two scopes for observing, I finally decided to look for a second premium RACI. While exploring different options I have stumbled on the Apertura version. As you may know High Point Scientific has acquired rights to the Apertura brand originally associated with Dobsonian telescopes and has extended it to various accessories. What caught my eye is that the Apertura RACI looked very similar to my Stellarvue RACI (as you see in the pic below) and pretty much identical to the modern Stellarvue version. 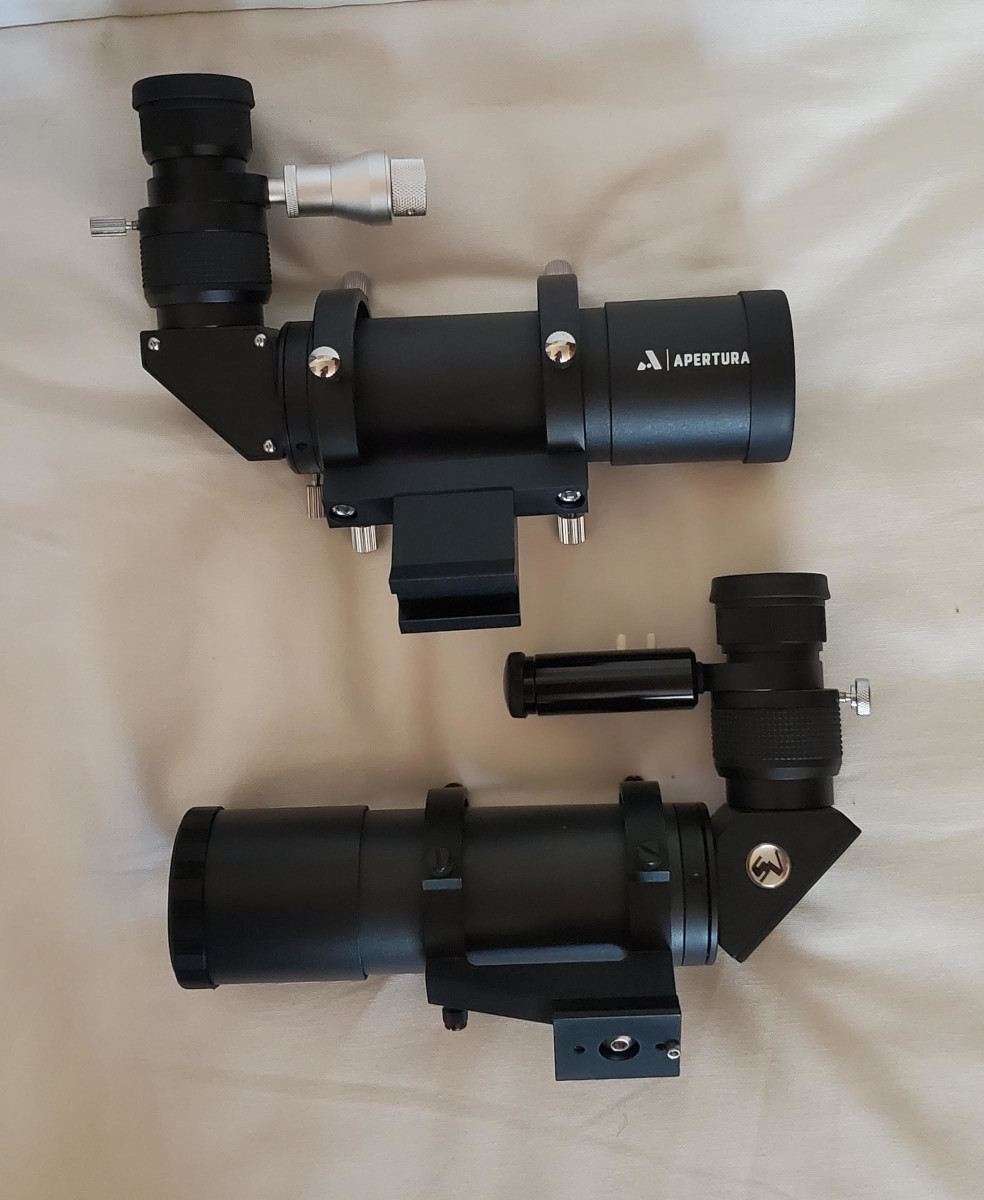 Apertura and Stellarvue are currently priced the same, but Stellarvue is shipped bare boned and purchasing rings, reticle EP and illuminator will set you another $100 easily. Apertura is shipped with everything needed, including universal finder base which you can attach to any type of scope. The finder foot and base are Vixen/Synta style, and the foot will fit stock refractor focusers with built-in finder base.

Why consider a finder upgrade? I am a visual observer with manual mount and as such spend a good portion of observing session looking through finders while navigating to the next target. Once I realized that, upgrading finders became as justifiable as getting better EP or better telescope.

Premium RACI is essentially a small fast refractor. It has the same components including removable diagonal and focuser (typically helical). It will have better fits and finishes and better sharper optics.

The most important benefit IMO is ability to switch EPs and use regular 1.25” EPs. Apertura RACI is a 50mm F4 refractor with focal length of 200mm. By switching EPs you have ability to control RACI’s magnification, FOV and exit pupil. It comes with 20mm 50 deg FOV illuminated reticle EP which produces 10x 5 deg TFV. By switching to 20mm 70 deg EP you could keep the same 10x magnification and 5mm exit pupil, but achieve 7 deg TFV, which doubles viewing area. Alternatively, if you are looking for a smaller fainter target and/or under heavier light pollution, you can use 10mm 82 deg EP which would result in 2.5mm exit pupil, darker sky background, 20x magnification and 4.1 deg TFV, still wide enough for star hopping. It never occurred to me until now, but next time I will drop in 3mM TV Delite or 2.5mm Vixen SLV and see what this baby can do on the Moon. :D

As I mentioned the RACI comes equipped with illuminated reticle EP. While reticle is not an absolute necessity, it improves the accuracy of alignment and navigation. Illuminated reticles typically have thinner crosshair compared to none-illuminated type. The EP also has built-in focuser to adjust crosshair sharpness and you will learn to love illumination, in particular under darker skies.

Other useful features included better quality rings with 6 teflone-coated screws, which hold alignment more securely than 3 screws and rubber ring type holder, and rotatable and removable diagonal. Diagonal rotation gives you fast convenient option to keep finder EP in comfortable position relative to the angle of your scope, and removable diagonal gives you the option to use your RACI as a guide scope for AP. Removable EP also means that you can rotate the crosshair to the desired angle. I know it is a small perk, but in the fixed EP type RACIs the crosshair sometimes sits at the odd angle, which I find unsettling. :lol:

Here is the new Apertura RACI installed, aligned with 8” SCT and ready for action. It is equipped with extra long dew shield, which I make from crafting foam for all my scopes, big and small. 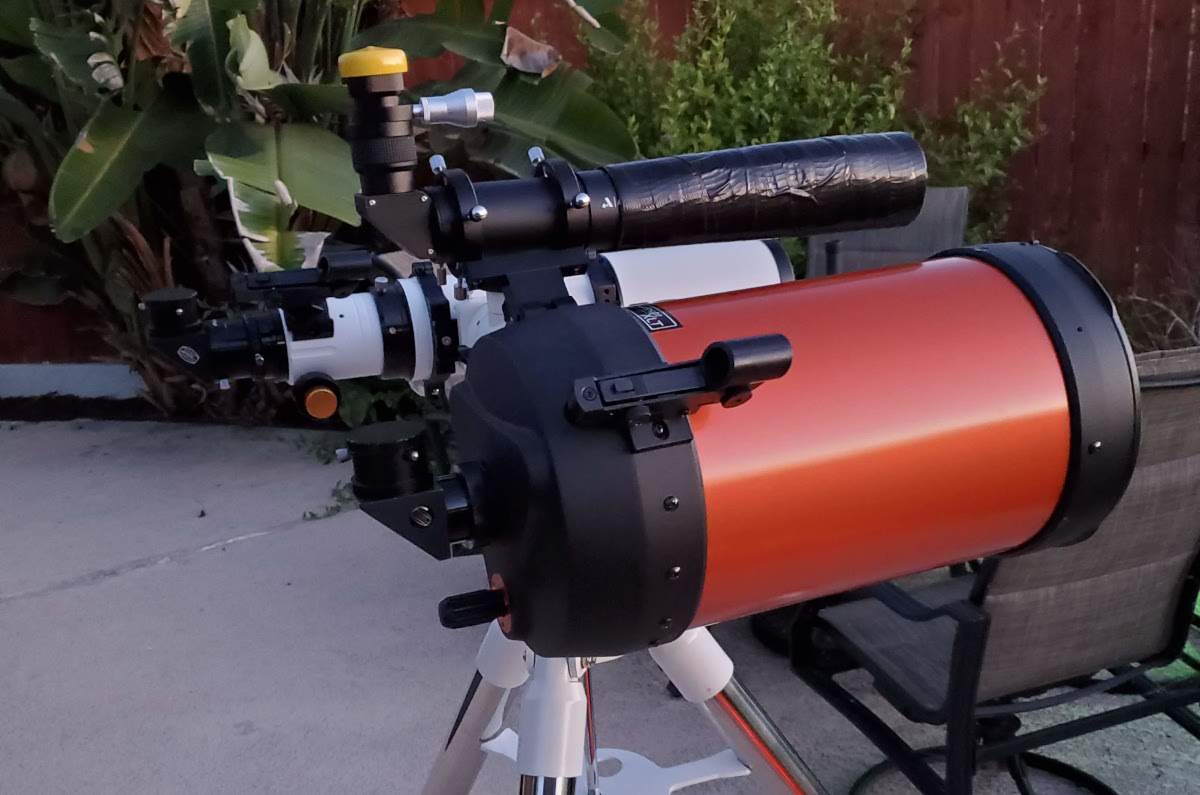 After using it during the last session I can say that it is as sharp, functional, and enjoyable as the Stellarvue version. Basically, two re-brands of the same good quality product. Did I mention it also comes in white? :)

Thanks to our Supporters!